Senegal, who have never won the Africa Cup of Nations, showed their strength by coming close to taking the lead, but secured victory in the second half. 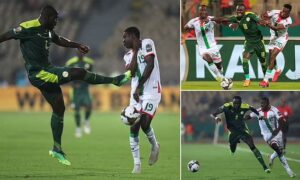 Three goals from Abdou Diallo, Idrissa Gana Gueye and Sadio Mane secured Senegal a place in the final as they hoped to believe a new history of joining the winners.

In the first ten minutes Burkina Faso had two chances they were unable to convert, while Senegal were awarded a free kick not far away.

In the 32nd minute, Senegal claimed a penalty after the Burkina Faso goalkeeper made a mistake, but a VAR foul ruled the record, while goalkeeper Hervé Koffi left the pitch with an injury.

Bamba Dieng and Sadio Mane should have scored before the break but they never capitalized their chances.

Abdou Diallo scores Senegal opener at 70th minute and this time Senegal was in dream land as they got the first goal of the game.

Six minutes later, Senegal extended their lead with a second goal from Idrissa Gana Gueye, in which Senegal were confident of advancing to the final of the Africa Cup of Nations.

Burkina Faso put in a lot of effort when they conceded both goals, eight minutes before the end of the second half, Ibrahim Blati Toure scored a consolation goal for Burkina Faso as they battled for a draw.

Three minutes before the end of the match he scored the third goal for Senegal, as the West African team advanced to the finals of the Africa Cup of Nations.

Senegal will play Egypt and Cameroon in the final in the final. Sadio Mané has three goals and two assists in six AFCON games for Senegal Team.

Since taking over the Senegal job in 2015, Aliou Cisse has led Senegal in 17 Afcon games.He’s only lost to two countries which are Algeria and Cameroon.